Before understanding hearing loss, it’s important for to understand your sense of hearing. Hearing is a delicate and complicated process that requires work from both your ears and your brain. From the time a sound is produced to the time your brain processes that sound, many significant steps occur. Understanding how hearing works begins with the biology of the ear. 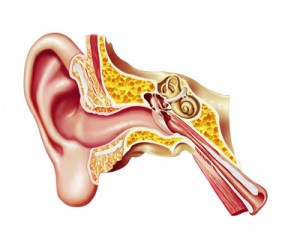 Your ear has three major parts—the outer ear, the middle ear and the inner ear—each of which plays a significant role in hearing.

The outer ear, which you can see when you look in the mirror, is precisely shaped to gather sound and direct it toward your eardrum. The outer ear has two major parts: the oracle (also called the pinna) and the ear canal. The way the oracle sends sound waves into the ear canal allows you to naturally determine the direction from which a sound came.

The sounds that travel into the outer ear, past the pinna and through the ear canal eventually arrive at the eardrum. This is the beginning of the middle ear, which also contains three tiny but very important bones called ossicles. The eardrum and ossicles begin moving when they perceive sound. This movement turns the sound waves into vibrations.

The vibrations from the middle ear set forth a series of movements in the inner ear, where the sensory organs for hearing and balance reside. First, they hit the cochlea—a tiny, bony, fluid-filled structure that contains the sensory organ and nerve receptor hair cells necessary for hearing. As the cochlea’s membrane begins moving, it stimulates motion in the hair calls, which individually respond to different sound frequencies.

When these hair cells move, sound is transformed into nerve impulses, which are sent to the part of the brain that processes sound—the auditory cortex—by way of the auditory nerve. The brain then transforms these nerve impulses into signals that you know and understand as sound.